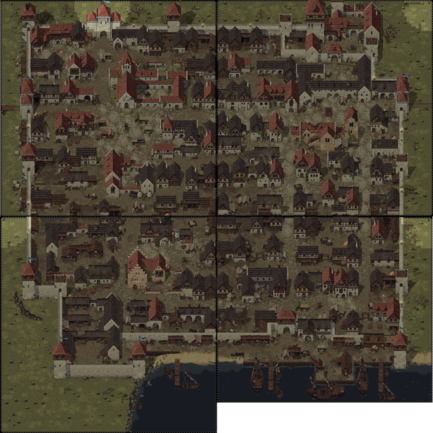 Brynn. The mere mention of it invokes images of freedom and affluence. Some people see it as a city of skilled craftsmen and industrious merchants, while others - a den of petty hagglers and crooks, where a purse full of gold is more valuable than a person’s life. Either way, there can be little argument about one thing - Brynn is the wealthiest Aldorian city and one of the most prosperous places on the western side of the Continent.

There’s a saying that the very air of Brynn makes people free: according to an ancient custom, anyone can become its citizen after living there for a year. As a result, the city has always been attracting people fleeing from serfdom, poverty, and hunger, many of them becoming permanent residents. After the recent war these streams of refugees turned into rivers, which flooded the city’s streets with peasants hoping to earn some coin for themselves and their families.

It wouldn’t be true to say that Brynn survived the Strife unscathed - after all, the war actually started because of it. During his rule, the late King Etbert stripped Brynn of its status as a free city, making quite a lot of enemies in the process. The monarch’s death and the succession crisis, which followed afterwards, created a perfect opportunity for overturning this decision, and the Brynn elites did just that.

Brynn refused to recognize the authority of the Regent Queen, who became the next ruler, instead opting for an open rebellion. The royal governor was apprehended and executed without a trial, and the control was once again seized by the richest merchant families of the city - the Silver League. The age-long dispute between the local merchants and the nobility was temporarily set aside: they united against the common enemy, creating the Great Magistrate. They plan to settle for no less than overthrowing the existing order and rebuilding Aldor as an alliance of free cities, where kings exist only in fairy tales.

The Royal Council, which rallied around the Regent Queen, decided to take Brynn back by force. At first, luck was on the Council's side: the royal army managed to come out victorious in a few important battles and even reached the walls of Brynn. It seemed that the city was doomed, but the skillful leadership of Duke di Berro allowed the Magistrate to turn the tide and send the enemy fleeing.

The Magistrate got a decisive advantage, and only a sudden outbreak of the Crimson Plague prevented it from launching a counterattack. This never-before-seen disease gave a proper scare to both sides of the conflict and forced them into signing a truce. Soon the Plague ended as inexplicably as it began, but both the Council and the Magistrate decided to maintain the shaky peace and lick their wounds.

This moment of respite was used by the Magistrate to great effect: it invested a huge amount of resources into restoring Brynn, so now the only thing reminding of the brutal siege is scaffolding next to a few remaining breaches in the city’s walls. And yet, even though Brynn is well-prepared to repel external enemies, internal struggles can often be much more unpredictable and insidious... 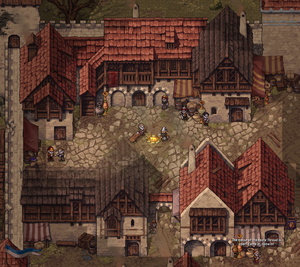 Brynn is split into four parts:

Various establishments are located in different quarters of Brynn, and most are unique to that quarter.

North of the city is a small homestead - the Brynn Outskirts.

Brynn is the Great Magistrate in miniature, its political conflicts being most evident in the city’s day-to-day life. There are three major factions competing for control over Brynn:

The Silver League used to be a mid-tier merchant guild. However, over the centuries it amassed great amounts of wealth and political power. The independence of Brynn, the creation of the Magistrate and the civil war which followed - these events were engineered and set in motion mainly by the highest circles of the League. The League’s cumbersome bureaucracy, although still effective, has lately begun to struggle with its responsibilities. To many of the League’s members it came as a surprise that not every war can be won with money alone, but this realization was long overdue. Ever since the previous burgomaster’s unsolved murder, the League has been led by Jeon Ballar - a descendant of the richest Brynn family, which made its fortune by trading in elven silk. His enemies often accuse him of currying favors with the Jacinth Kingdoms, and perhaps rightfully so, but no one can rival Jeon in achieving compromises and forming unlikely alliances. The existing status quo between the city factions can be attributed entirely to his efforts.

The Vanguard is a large army consisting of the local nobility’s troops, mercenary bands, and the city’s militia. Created by the League in an effort to reorganize the army, the Vanguard quickly became a government within a government, deeply discontent about the overwhelming influence that the mechant estate has over the Magistrate. The competent and decisive actions of the Vanguard protected Brynn from being captured by the royalists, so now its military leaders firmly believe that their sacrifice and valor earned them the right to rule the country. The only thing preventing them from openly confronting the League is the money it supports the army with. The leader of the Vanguard is Duke Arno di Berro, a scion of an old family from the Bronze Isles, who happened to settle down in Aldor. Arno di Berro is an aristocrat in a true sense of this word, and, as expected of an aristocrat, he shows open disdain for republican ideals. Despite all that, he’s still ready to fight for the Magistrate with all the ferocity and courage he can muster...

The New Guild are the artisans of Brynn, its sweat and blood. Initially the city had numerous guilds for various crafts. Their influence was so great that over the years at least a dozen craftsmen assumed the post of Brynn burgomaster. This fact had been greatly annoying the merchant estate, so not long after the war began, they attempted to deal with the guilds once and for all. Using wartime needs as an excuse, the League merged all guilds into one, placing it under its direct control. This violation of the free craftsmen’s ancient traditions provoked an unrest bordering on revolt. The League was forced to concede, granting the Guild a certain freedom of action, which resulted in the artisan estate gaining more power than it had originally. The Guild is led by Grandmaster Denvar Brie - one of the best weaponsmiths in the city, a stern and overbearing person. He regards the League in its current state as a crowd of freeloaders living off the working people. All it takes is a snap of his fingers to put all city business on halt, something which he most likely plans to leverage for his own gain.