Reputation is a measure of your acceptance by the people. Mercenaries outside of the times of war were often happy to steal and kill in order to survive, so it's no surprise that the locals view them with suspicion. Each village keeps track of your deeds in the form of reputation and acts accordingly. 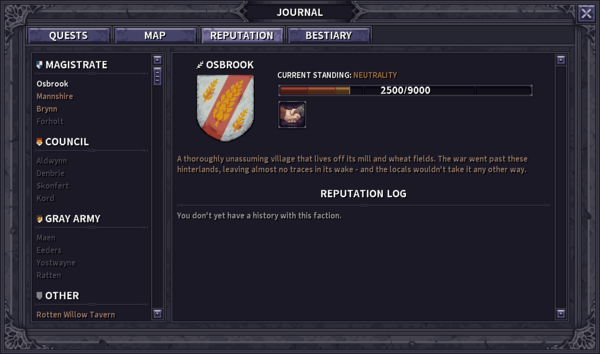 There are currently two reputation types:

You can access the information about reputation by opening your Journal (press J key) and switching to the Reputation tab.

There is currently very little information regarding Faction reputation. Currently, only reputation within a given Settlement has any effect on gameplay.

The Reputation Tab lists the following Factions and their Settlements:

Reputation changes through interacting with NPCs in their respective Settlements.

Currently there are 6 reputation levels:

Reputation affects buy and sell prices for all shops in the respective Settlement and the quality and variety of available items. An item's level is it's equivalent tier; for example, if you want to buy a Wizard Staff, you need to reach Respect in Mannshire before it starts to appearing at the blacksmith.

The following table shows how reputation affects the pricing and item level bonuses: