After a dangerous battle or a prolonged journey, your character will feel tired. This is the time to rest. 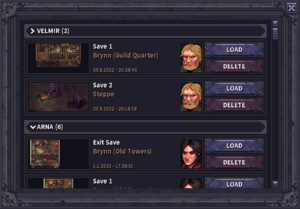 Resting is how your character replenishes his health and energy. Resting is also incorporated into the Save System.

Stoneshard uses a unique save system. For each character you start a New Game with, you can have up to two save slots. Game automatically overwrites your older save when you create a new save - for example you can have one save in town and another before a dungeon. Each character you start a New Game with will be kept as a separate save with its own randomized NPCs, progress and saved decisions. If you create two different Arnas for example, you can have an Arna who specializes in Greatswords and focuses on Contracts, and another Arna who favors Maces and Shields and prefers hunting and destroying undead.

To save your progress, your character needs to sleep. To sleep, you have to find a bed first, you cannot sleep on the ground.

To sleep at an Inn, you first need to pay the local innkeeper. Sleeping at camps or Unique POIs is free. Bedroll cost varies depending on your reputation with a given Town.

Since the 0.7.0.0 CIty of Gold update, the game is automatically saved upon pressing the "Save and exit" button in game menu. This quicksave was only added to cover situations where the player needs to turn off the device "right now". Quicksave is deleted immediately after loading. Quicksave does not overwrite your two standard save slots, instead it appears as a third save.

Before this update, player had to rest somewhere to save their progress. 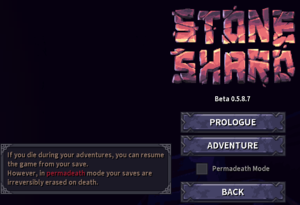 Fatigue is a system that limits for how long can you keep going.

Fatigue works similarly to other Health mechanics: it can range from 0 to 100% and is generated by a variety of actions:

Fatigue Gain - Affects the rate of gaining Fatigue. The rate of Fatigue Gain is tied to a couple other stats: first of all, there’s Fatigue Resistance, which can be both negative and positive. Secondly, Max Energy also plays a big role - the higher it is, the longer it will be before your character gets tired.

Each percent of Fatigue lowers Max Energy Threshold by 0.75%. When reaching certain levels, it produces the following negative effects:

There are many ways to combat Fatigue:

Each time you sleep in bed, the time skips forward for the selected amount of hours. While you sleep, the world around you doesn't move, but certain scripted events do happen. For example, the townsfolk will go to their homes or back to their shops depending on the time you wake up. This mechanic tries to mimic how waiting X amount of time works in other games, for example The Elder Scrolls series.

Your needs will also keep accumulating during sleep, so you will be hungry and thirsty after a long sleep, hunger being prevalent. And your fatigue also will lower.

There are a list of Brynn taverns and other PoI's with respective information about how good they are at reducing Fatigue and etc.

Every hour of staying awake increase the maximum sleep duration by one hour, capping at 8 possible hours of sleep. Each 5% Fatigue additionally increases this number by one hour. This means that after 8 hours of activity you’ll be able to sleep for 8 hours, and if your character is also completely exhausted, they’ll be able to stay in bed for up to 28 hours.

Sleeping in some beds also applies the Vigorous buff, with duration depending on how long have you slept and if you have slept recently.

Another form of Resting your character is the Rest Mode, which replenishes your Health and Energy and lowers your Fatigue at an accelerated rate by making turns pass faster. Rest Mode cannot be used to Save the game. For more info about Rest Mode, see Combat_Formulas#Rest_Mode.